New Testimonial - New experiences are now "live" on the Chant for a Better Life blog.

Request for Testimonials - We would like to encourage all Soka members from around the world to send in your testimonials to actualproofs[at]yahoo.com and share your experiences - how you overcome the challenges you faced and achieve victories - with other members who could learn from you.

President Daisaku Ikeda, or affectionately known as Ikeda sensei or mentor by the Soka Gakkai members, was born in Tokyo, Japan, on January 2, 1928, the fifth of eight children in a family of seaweed farmers. Ikeda grew up in an age when Japan's militarist regime was driving the nation inexorably to war.

In 1937, the year full-scale hostilities broke out between Japan and China, Ikeda's eldest brother, Kiichi, was drafted, to be followed by three other brothers as the years passed. Kiichi was killed in the war, but his description of his disgust at the Japanese military's treatment of the Chinese people left a lasting impression on Ikeda.

Ikeda was a young teenager in the 1940s when Japan entered World War II. His family home was twice destroyed in air raids and he experienced firsthand the devastation of the March 9-10, 1945, firebombing of Tokyo in which 100,000 people were killed.

In the chaos of postwar Japan, Ikeda encountered Josei Toda (1900-58), head of the lay Buddhist organization Soka Gakkai, who had opposed the policies of the wartime government and had suffered persecutions and a two-year imprisonment as a result.

Toda was in the process of rebuilding the Soka Gakkai, which he had founded together with fellow educator Tsunesaburo Makiguchi (1871-1944) in 1930 and which had been all but destroyed by the militarist government during the war.

Toda was deeply convinced that the philosophy of Nichiren Buddhism, with its focus on the profound potential of the individual human being, would be the key to bringing about a social transformation within Japan.

Ikeda joined the Soka Gakkai in 1947. He devoted himself to supporting Toda and his vision, completing his education under the tutelage of Toda, who became his mentor in life. He assisted Toda following the collapse of his businesses during the war, and then played a central role in helping achieve a monumental increase in the Soka Gakkai's membership, from just 3,000 households in 1951 to 750,000 by 1957.
Soka Gakkai President

In May 1960, two years after Toda's death, Ikeda, then 32, succeeded him as president of the Soka Gakkai. One of Ikeda's first initiatives after assuming the presidency was to undertake a trip abroad in order to encourage Soka Gakkai members living overseas.

In the USA, and in the numerous other countries he visited in the next few years, Ikeda established an organizational structure to encourage and facilitate more frequent interaction between the members. Within his first four years as president, he had traveled to North and South America, Europe, Asia, the Middle East and Oceania, starting to lay the foundations for an overseas organization that today has members in 192 countries and territories.

It was also during these overseas trips that he began planning the foundation of a series of research and other institutions dedicated to academic and cultural exchange and peace research.

These include the Institute of Oriental Philosophy (1962), the Min-On Concert Association (1963), the Tokyo Fuji Art Museum (1983), the Ikeda Center for Peace, Learning, and Dialogue (formerly, the Boston Research Center for the 21st Century, 1993) and the Toda Institute for Global Peace and Policy Research (1996).

Both Toda and his mentor, Makiguchi, had been educators working to implement Makiguchi's theory of value-creating pedagogy, and one of Ikeda's initiatives was to establish a system of schools that would give physical form to the ideals of his predecessors.

Junior and Senior Soka High Schools were founded in Tokyo in 1968, followed by the establishment of Soka University in 1971 and Soka University of America in 2001. The establishment of these schools, which are open to all students and offer no religious instruction, was the first major step in an ongoing endeavor to develop a humanistic educational system, one that Ikeda has described as the culminating undertaking of his life.

In 1965 Ikeda began writing his serialized novel, The Human Revolution, which details the struggles of his mentor, Josei Toda, to reconstruct the Soka Gakkai after his release from prison at the end of World War II.

It opens with a concise, scathing condemnation of war and militarism that offers a clear context for the movement's objectives: "Nothing is more barbarous than war. Nothing is more cruel . . . . Nothing is more pitiful than a nation being swept along by fools."

On September 8, 1968, during an address to some 20,000 members of the Soka Gakkai's student division, Ikeda called for the normalization of Sino-Japanese diplomatic relations and outlined steps toward achieving this.

At the time, China was still perceived as an enemy nation by many within Japan and was isolated within the international community. Ikeda's proposal drew condemnation, but it also caught the attention of those, both in China and in Japan, who were interested in restoring relations between the two countries, including Chinese Premier Zhou Enlai.

Ikeda also began to engage in dialogue with political figures during the 1970s. This was a time of deep tensions between the superpowers, with the threat of nuclear annihilation hanging over humanity.

During 1974 and 1975, he visited China, the USSR and the USA, meeting with Zhou Enlai, Soviet Premier Aleksey Kosygin and US Secretary of State Henry Kissinger in turn, in an effort to break deadlock and open channels of communication in order to help prevent the outbreak of war.

One of the hallmarks of Ikeda's peace philosophy is his commitment to dialogue. He has met and exchanged views with representatives of cultural, political, educational and artistic fields from around the world.

Ikeda's activities during the 1970s demonstrated that his vision of the role of Nichiren Buddhism in society--its imperative for people's happiness--is not bound by a narrow sense of religiosity. For Ikeda, Nichiren's Buddhism is the philosophical basis for an active engagement with the global and societal challenges of the modern world.

SGI President
On January 26, 1975, Soka Gakkai representatives from 51 countries and territories gathered on the island of Guam where the Soka Gakkai International (SGI) was established, with Ikeda as its founding president. The site of some of the bloodiest fighting of World War II, Guam was symbolically chosen as the site of this meeting to launch a new movement for peace.

Since that time, the SGI has developed into a broad global network with affiliated, independent SGI organizations in 84 countries and territories.

As well as teaching the practice and philosophy of Nichiren Buddhism, local SGI organizations promote the causes of peace, culture and education in their respective societies, while the organization has also developed large-scale international public exhibitions on such issues as building a culture of peace, nuclear abolition, sustainable development and human rights.

In 1983, Ikeda began writing peace proposals, which he has continued to publish annually on the anniversary of the SGI's founding, January 26.

These proposals offer a perspective on issues facing humanity, suggesting solutions and responses grounded in Buddhist philosophy. They include specific agendas for strengthening the United Nations, including boosting the capacity for civil society involvement, which Ikeda regards as essential to the establishment of a peaceful world. The proposals frequently illustrate the crucial importance of dialogue as a means to break through deadlock in world affairs.

In addition to his own wartime experiences, the starting point for Ikeda's championing of peace is the declaration calling for the abolition of nuclear weapons made by Josei Toda in 1957, the year before his death.

Toda denounced nuclear weapons as the embodiment of evil, insisting that their use must be condemned, not from the standpoint of ideology, nationality or ethnic identity, but from the universal dimension of humanity and our inalienable right to live.

Ikeda has ceaselessly dedicated himself to spreading this message around the globe, raising awareness and building a grassroots movement which works for the abolition of these most inhumane weapons.

In 1974, Ikeda accepted an invitation to deliver a lecture at the University of California, Los Angeles. The following year he delivered a lecture at Moscow State University entitled "A New Road to East-West Cultural Exchange."

On the same occasion he accepted an honorary doctorate from the university. These events signaled the beginning of a growing international recognition for his contributions to cultural exchange and the promotion of education and peace.

During the 1980s and 1990s, Ikeda accepted invitations to speak at some 30 universities throughout Asia, America and Europe. His lectures explore the themes of education, cultural exchange and peace, grounded in his Buddhist perspective and considered within the particular cultural, intellectual and historical context of the country concerned.

To date, Ikeda has been awarded with nearly 300 honorary doctorates and professorships from institutions around the world.

His writings on peace are currently used in university-level course materials in countries as diverse as Argentina and the United States. Over 20 research institutes have been dedicated to the study of his philosophy.

The central tenet of Ikeda's thought is the fundamental sanctity of life, a value which he sees as the key to lasting peace and human happiness. In his view, global peace relies ultimately on a self-directed transformation within the life of the individual, rather than on societal or structural reforms alone. While this route may be long, he believes it is the only way to build a lasting culture of peace. 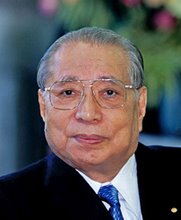 Daisaku Ikeda is a Buddhist philosopher, an educator and a prolific writer and poet. As president of the Soka Gakkai International (SGI) lay Buddhist movement, he has devoted himself to wide-ranging efforts for peace and individual empowerment, and has founded cultural, educational and peace research institutions around the world.

There are SGI members in 192 countries and territories and 84 registered constituent SGI organizations.

Thank You for Visiting This Blog